14 Flags Over the Three Rivers Area 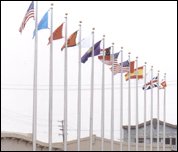 In 1541, Francisco Vasquez de Coronado brought the area under Spanish control with an expedition into what is now Oklahoma. He raised the Royal Standard of Spain, known as the “Castle and Lion” flag. For over 100 years, Spanish claim to the area was undisputed, though no active effort was made by the Spanish to settle here or establish trade.

In 1663, King Charles of Great Britain gave a wide strip of country from the Atlantic to the Pacific to eight of his loyal subjects. This wide strip was known as “The Carolinas,” and included the Three Rivers area. The land was given to these men to rule and profit from with the help of such local government as they might establish. The British flag was also known as the “Union Jack.”

In 1719, French explorer Bernard de la Harpe entered the Three Rivers area and claimed it for France. His exploratory party established alliances with local Indian tribes and the French flag flew over several villages in the area. French trappers and traders soon moved into the area to exploit the abundant supply of furs and hides. The French flag, known as the Fleur-de-Lis (Lily) symbolized the Bourbons and the French Royal Family.

Standard of the Spanish Empire

In 1763, France gave all the country west of the Mississippi to Spain in the Treaty of Paris which brought an end to the French and Indian War in America. In the treaty, France agreed to withdraw completely from the continent of North America. The Three Rivers area was a part of the province known as Louisiana. The Spanish governor at New Orleans and the Spanish governor of Texas combined their efforts to control trade in this area.

Flag of the French Republic

The French once again assumed control of the Three Rivers area in 1800. Napoleon Bonaparte reclaimed the area known as Louisiana in a secret treaty with Spain. When news of the treaty reached United States leaders, they feared the French would interfere with a growing American trade on the Mississippi River. However, France never actively pursued its claim of Louisiana. Ownership of the territory would prove useful to Bonaparte in later years.

On April 30, 1803, the United States gained control of the Three Rivers area when President Thomas Jefferson acquired the region as a part of the Louisiana Purchase for a total of 15 million dollars. Bonaparte decided to sell Louisiana to help finance his war against Great Britain. Jefferson immediately sent out explorers into the vast lands the U.S. had acquired. The journals of explorers such as James Wilkerson and Thomas Nuttall are some of the first recorded accounts of the Three Rivers area. The 15-star and 15-stripe flag is the “Star Spangled Banner” that Francis Scott Key later wrote of in the War of 1812.

By 1818, Congress recognized that it would be impractical to add a new stripe as well as a new star for each new state that joined the Union. In the Flag Act of 1818, Congress established that the stripes would remain at 13 for the original colonies and a new star would be added for each new state admitted to the Union. The star would be added to the flag on the 4th of July following the date of admission. The flag of 1818 is considered to be the first standardized United States flag.

The First Cherokee Mounted Rifles were formed on August 31,1862 with Colonel Stand Waite in command. This unit adopted the Cherokee Braves flag as its regimental colors. After the Battle of Pea Ridge in Arkansas, many Cherokees left the Civil War, but Waite and his Cherokee Braves remained for the duration of the war. Waite was the only Native American to reach the rank of General in the Civil War. He was also the last Confederate General to formally surrender to the Union, doing so on June 25, 1865.

The Choctaw Nation was the first of the Five Civilized Tribes granted domain in Indian Territory. The Nation was organized in 1834 under a written constitution, the first constitution written within the boundaries of what became Oklahoma. In the Three Rivers area, Haskell County and part of McIntosh County were Choctaw land. The Great Seal of the Choctaw Tribe was adopted in 1860.

The Muscogee or Creeks were the second of the Five Civilized Tribes to move into the Three Rivers area after the removal treaty of 1832. At that time, the Muscogee leadership exchanged their ancestral homeland in the Southeastern United States for new lands in Indian Territory. The Creeks moved to areas that now include Okmulgee, McIntosh, Muskogee, and Wagoner Counties of Oklahoma in the Three Rivers region. The Great Seal of the Muscogee Nation was adopted after the Civil War.

Under orders of President Andrew Jackson, the U.S. Army began enforcement of the Indian Removal Act, in the summer of 1838. Members of the Cherokee tribe were forced to journey to new land in Indian Territory along what became known as the “Trail of Tears.” An estimated 4,000 died from hunger, exposure and disease during this forced migration. The Cherokees were moved into what is today Cherokee, Mayes, Wagoner, Sequoyah and part of Muskogee Counties in the Three Rivers area. The flag was approved by Tribal Council on October 9, 1978.

The first Oklahoma State flag was designed in 1911. It consisted of a white star on a red background with the number 46 in the star in blue because Oklahoma was the 46th state admitted to the Union. After the Russian Revolution in 1917, flags with a field of red and a single star became associated with communism. In 1924, a contest was held to select a new design for the state flag.

The contest held in 1924 created a design for the Oklahoma State flag that more uniquely represented the diversity of cultures in Oklahoma. The contest was won by Mrs. George Fluke, Jr. whose design was adopted on April 2, 1925. The flag prominently displays an Osage warrior’s shield crossed by two symbols of peace — the calumet or ceremonial peace pipe and the olive branch. The word Oklahoma was added to the flag in 1941.

The current United States flag was first flown on July 4, 1960 following the admission of Hawaii, the 50th state, in 1959. This flag was first raised in a special ceremony at Fort McHenry near Baltimore, Maryland where our national anthem was written. This flag was the first flag to be flown on the moon by astronauts Neil Armstrong and Edwin Aldrin.