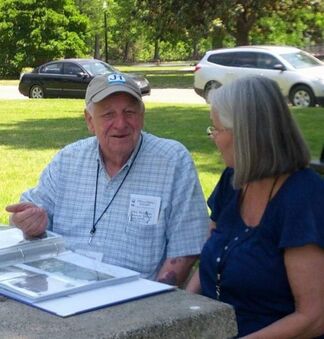 In Memoriam
1936 - 2019
Glenn E. Smith was a self-taught success. He wore many
hats during his life-time, such as race car driver, cowboy, collector of vintage vehicles and historian. Glenn served on the Three Rivers Museum Board for many years, all while lending his expertise and historical advice on projects and much more. He worked hard on the Oak Grove One Room Schoolhouse Restoration Project, and the Jefferson Highway Project where he became the President of the Jefferson Highway Association. Sharing his many historical photo's on Facebook became a joy for him while he still enjoyed cooking and passing on life's lessons. We will greatly miss him. 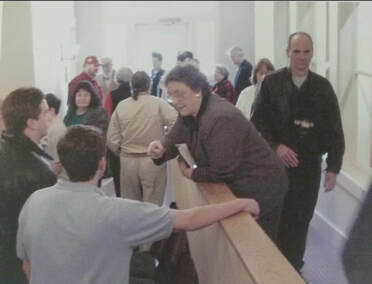 Shirley Rogers talking to her grandson, Travis Carter during the Grand Opening of the museum.
In Memoriam.
1928 - 2019
Shirley Val Rogers spent her 90 years of life raising a family, taking care of those around her, and instilling a pride and respect in all who knew her. Shirley was involved in many organization's that made a difference in Muskogee. Three Rivers Museum was one of those organization's where she was a founding member, Board member and retired member of the museum. She believed in the museum's mission to preserve history and wanted everyone around her to help preserve history. We are honored to have known this lady and will greatly miss her. 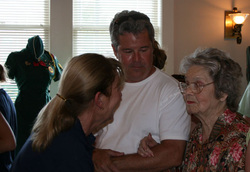 Mildred Cousins 1913-2011
Mildred was a founding Board Member of the Three Rivers Museum, having worked for many years with the late Dorothy Ball to raise funds and secure title to the former Midland Valley Depot. She remains an Emeritus Board Member. She cleaned the gardens, worked as a docent, and steadfastly advocated for the preservation of the Grant and Carolyn Thomas Foreman Home as a tribute to Muskogee pioneers.  She will be greatly missed by all that knew her.

E. L. "Bud" Stewart 1928 - 2011
E. L. "Bud" Stewart, Jr. of Muskogee, Oklahoma, died Monday, October 17, 2011 in Jacksonville, Florida after an extended illness. He was born at Fort Benning, Georgia on June 7, 1928 to then-Lieutenant Elam L. and Angie Lateer-Stewart. He moved with his parents to several U.S. Army posts across the country and in Hawaii until 1942 when he attended Culver Military Academy (Culver, IN), graduating in 1946. In 1950, he graduated from DePauw University in Greencastle, Indiana, with a BA Degree in Economics, where he was also a member of the Sigma Chi fraternity.

After graduating from DePauw he briefly worked for the Illinois Central Railroad in Chicago and, on April 7, 1951, he and Katharine (Kit) Sherman (DePauw '50", were united in marriage. Also in 1951, he began 10 years of service in the U.S. Army Reserves, resigning at rank of Captain, and started a lifetime career in oil and gas exploration and production. Serving initially as a "land man" with the Carter Oil Company (later Humble), in Mattoon and Carmi, Illinois for several years, he transferred to their Ponca City and Shawnee (Oklahoma) offices in the late 1950's.

In 1961, he became an independent oilman and started actively lobbying the federal government in the 1970's on behalf of the independent oil industry. He served over 25 years as President of the Energy Consumers and Producers Association, an oil and gas trade group and, from 1987 to 1991, served as Energy Advisor to Oklahoma governor Henry Bellmon, representing Oklahoma on Interstate Oil Compact Commission.

In 1962, he became active in the Republican Party of Oklahoma, initially serving as Pottawatomie County (OK) Chairman and then, as State Republican Chairman from 1965 to 1969, where he served four years as a member of the Republican National Committee, and was a delegate to the 1964, 1968, and 1988 Republican National Conventions. In 1969, he was appointed by then-President Richard Nixon to serve as Federal Chairman of the Ozarks Regional Commission which included the Governors of Oklahoma, Arkansas, Kansas, Missouri, and Louisiana, with headquarters in U. S. Department of Commerce, Washington D.C. In 1970, he established a regional office for the Ozark Commission whe he and his family moved to Muskogee, Oklahoma, and in 1976, he was the Republican nominee/candidate for Oklahoma's 2nd District Congressional seat.

Active in community affairs, he served as an Elder in the First Presbyterian Churches in Shawnee and Muskogee; was a founder and past president of Kendall Place Historic District; founder and board member of the Three Rivers Museum; served twice on the Muskogee Historical Preservation Commission; was a long time consultant to the Muskogee Convention and Tourism Council and member of the Chamber of Commerce; Friends of Oklahoma Music Board; Treasurer of the Upper McClellan Kerr Waterway Association; More Beautiful Muskogee; developed Harborcliff condominiums on Ft. Gibson Lake, and enjoyed boating and model railroading as hobbies.

His wife of 54 years, Kit, predeceased him on August 2, 2005. Bud is survived by one son, Matthew, daughter-in-law, Linda; four grandchildren, Wesley and Whitney Stewart; Barak and Coby Davis, as well as Emma Nichole Davis- a great granddaughter, all of the Neptune Beach/Jacksonville, Florida area.

Memorial services were held at 11:00 a.m. Saturday, November 5, 2011 at the First Presbyterian Church of Muskogee with Pastor Ann Brizendine officiating. Interment was in the Stewart Family plot at Maple Ridge Cemetery in Carmi, Illinois following a brief 10:00 a.m. service at Campbell Funeral Home on Tuesday, November 8, 2011. In lieu of flowers, the family asked that memorial gifts be made to Culver Educational Foundation in memory of Elam L. "Bud" Stewart, Culver Military Academy Graduate 1946 to: Culver Educational Foundation, 1300 Academy Road Box 153, Culver, IN 46511 or online at www.Culver.org: "Giving to Culver."