Paypal will include $5.50 shipping and sales tax to your order.

If you prefer, you can call the museum during business hours and order with your credit card. 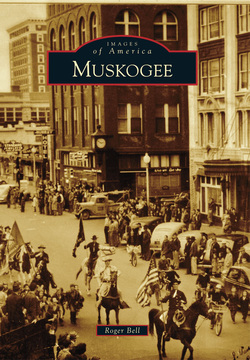 From Arcadia Publishing's Images of America series is Muskogee by local author Roger Bell. This pictorial history boasts more than 200 vintage images, giving readers a unique opportunity to reconnect with the history that shaped their community.

On New Year's Day in 1872, a Missouri-Kansas-Texas railroad (Katy) track crew reached a point just a few miles south of the confluence of the Arkansas, Grand, and Verdigris Rivers in Indian Territory and established a depot it called Muscogee Station. A ragtag settlement quickly developed nearby, and the name was eventually changed to Muskogee.

By the turn of the century, Muskogee became the center of political and commercial activity in the territory. Nicknamed the "Queen City of the Southwest," Muskogee was a boomtown and expectations were high that the city would develop into a large metropolitan area. However, by the 1920s, after the oil boom in nearby Tulsa, Muskogee's growth waned and it became a working-class Oklahoma town.

The city was thrust into the national limelight in the 1960s by country music star Merle Haggard and his song "Okie from Muskogee," which described Muskogee as "a place where even squares can have a ball." An ethnically diverse community, Muskogee has a rich history of developing artists, musicians, politicians, and entrepreneurs.

Muskogee is available on this website, at the Three Rivers Museum, area bookstores, independent retailers, and online retailers or through Arcadia Publishing at www.arcadiapublishing.com