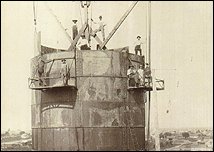 HOWARD V. HINCKLEY came to Muskogee in May of 1899. His initial task was to resurvey the streets of Muskogee following the disastrous fire of the previous winter when much of the business district burnt to the ground.

Hinckley was born in Massachusetts about 1856 and spent much of his adult life dealing with water related projects. By 1880 he had moved to Topeka, Kansas, and started his professional career as a civil engineer. It appears he began working with another engineer in Topeka named Clarence Pullen. His notable construction project by the end of the century was that of a stone bridge built in Topeka.

Because Hinckley went right to work the next day after arriving in Muskogee, it seems likely that he had already been in contact with representatives of the city. He quickly took on a “Mr. Hayes as his chief assistant” and ordered 6000 stakes for use in realigning the streets and businesses. Beginning with Main and Okmulgee, the realignment was to push into the residential areas as the work progressed.

Along with the rebuilding following the fire, the Muskogee City Council and the city fathers chose to address the need for an improved water source for both consumption and fire fighting. One advisor, Mr. E. Bent of Chicago, was brought in to evaluate the merit for a system of pipes and pumps and the cost associated with such a large project as Muskogee was considering. Projected costs were estimated at $150,000.

Hinckley’s skills in surveying and civil engineering prompted his selection to work on building a city-wide water supply system. The city council agreed to pay Hinckley $100 for “an outline plan and brief of specifications for a water works system and an estimate of the cost thereof…” He was then to receive 1½% of the estimated construction cost, less the $100 originally paid, to “prepare complete plans and specifications.” Altogether, drawing up the plans cost $2250. The contract with Hinckley further stated that he was to receive another 1½% of the actual construction costs for overseeing the work.

The Grand River’s clean water was widely preferred to the muddy Arkansas. Hinckley certainly designed the intake that drew water out of the Grand River for Muskogee consumption. The site for the pumping station was chosen because of “a vast bed of hard gravel, the deposit of ages…It is a natural filter which would cost hundreds of thousands [of dollars] to construct by artificial means. This pure spring water will receive this filtering and will come to the city almost as clear as distilled water.”

Work on the city’s waterworks commenced with the intention of bringing Grand River water to town. However, delays in building the conduit across the Arkansas River resulted in the Arkansas being the first source of water in 1903. Townspeople were therefore able to finally obtain water out of a faucet if they had signed up for a water connection. This water was safe for washing with, but had to be boiled for drinking and cooking. The main point of using water from the Arkansas River was to finally grant a sense of security in case another fire broke out.

The water pressure was less than adequate in mid-1903 because the water reservoir being built on Standpipe Hill, now just behind Sadler Elementary School, had reached a height of only 25 feet. The hill’s elevation and the short height of the reservoir still provided much of the pressure the city was to use for years to come. At its ultimate height of over 100 feet, the pressure and volume of the standpipe reservoir lasted the growing city less than ten years. Town growth and the reservoir’s design necessitated the construction of the Agency Hill reservoir.

Howard V. Hinckley’s plans and labor on behalf of Muskogee’s citizens brought water relief. When the work was finished, he moved on to other jobs. Though much of Hinckley’s life after his work in Muskogee is unknown, several facts are relevant. In 1907 he built a suspension bridge called the “Bromide Bridge” near Sulphur, Oklahoma. Apparently this bridge was located near Bromide Hill and Bromide Spring in Murray County.

Though the Bromide Bridge washed out in 1916, he continued to work designing bridges. At the time of his death on 21 Apr 1926 he was working as a bridge engineer for the State of Oklahoma and resided in Oklahoma City. He was a member of the American Society of Civil Engineers and a contributor to the society’s annual Transactions.